Shitake mushroom has got good flavor and it really enhances the dishes as it makes the food taste meatier. 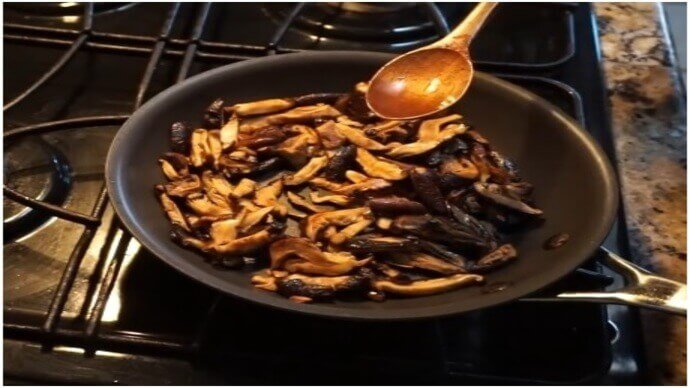 Shiitake: 4 dried shiitake (15 gms) provides 45 Calorie and 12 gm carb 2-gram fiber and 1 gm Protein. It is also a good source of Vitamin B5, copper, riboflavin and niacin. In addition, they contain many amino acids that are present in the meat.

Sesame oil: One tablespoon of sesame oil provides 119 calories and 13,5 gm fat. It does not contain any carbohydrate or protein.

Soya sauce: One tablespoon of soya sauce provides 8 calories and contains 902 mg of sodium 1 gm carbohydrate and 1 grams protein. There are four basic ingredients in soy sauce – soybeans, wheat, salt and fermenting agents like mold or yeast. Dark soya sauce is reddish-brown in color and has strong aroma while Light soya sauce has a milder aroma, lighter in color and has more soybean and less wheat in it.

Black Pepper: It is an excellent source of manganese and vitamin K. It is also a very good source of copper and dietary fiber, and a good source of iron, chromium, and calcium. Black pepper helps in digestion by stimulating the taste buds which sends a trigger to the stomach to increase hydrochloric acid secretion, which in turn improves digestion. 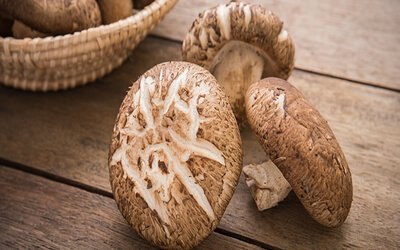 This recipe will show you how to use shiitake mushroom as a side dish or as a garnishment for vegan dishes.

If you are a vegan you will just love this.

Rinse the shiitakes or wipe the caps with a damp paper towel. Stems of shiitake must be removed before cooking. The stems are not easy to twist off . You will need a sharp knife to trim the stems where they attach to the cap.

The stems are too tough to eat, but you can use them in broth or in soup to add flavor. 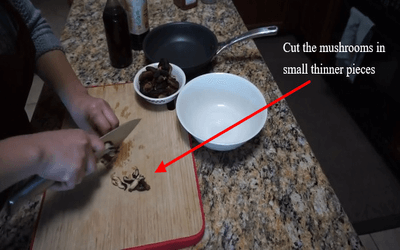 After cleaning and removing the stems cut the shiitake mushrooms into small pieces. Do not make them too thick

Put the cut pieces in a mixing bowl as you are going to add ingredients to it for marination. 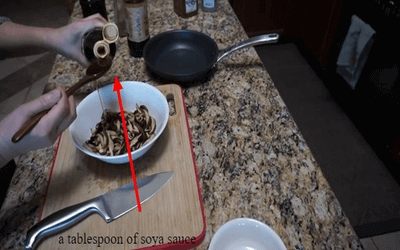 Add a tablespoon of sesame oil and soya sauce each. 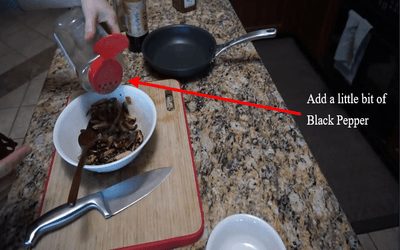 Those are the only three ingredients you need to use.

How to stir fry Shiitake mushroom?

Turn the heat on high and add the marinated mushrooms to a frying pan. 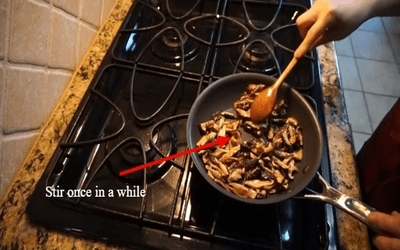 Stir once in a while until it starts getting a color. 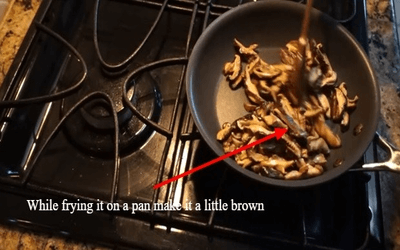 This doesn’t take too long to cook , You want to have a roasted flavor to it. 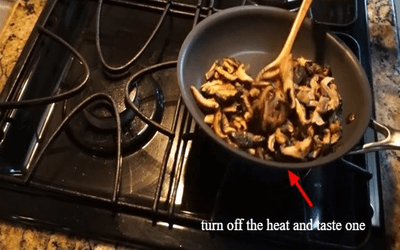 Just keep an eye on it as you don’t want it to get burned. Fry till there is no more liquid left on it and the mushrooms have turned brown.

It will take about 10 minutes and you can see the color. Once fried the color would remind you about sliced meat 🙂

You can use it as aside dish or you could cook it and store it in a refrigerator. Next time whenever you are cooking your vegan dish you will already have readymade shiitake mushroom fry that would enhance your soup or any other dishes.

How long to soak shiitake mushrooms?

Soak shiitake in warm water for 20 minutes or so and then wring the water out of them. Soaking transforms the shiitake texture from tough to silky, and they will cook much better as they will consume less oil or other liquid used in the recipe.

What to look for while buying Shiitake mushrooms?

When shopping look for shiitakes that has the thickest caps. Avoid those shrooms that look wet, slimy. These are likely to start to mold in a much shorter time.

If you can find shiitakes with caps domed and curl under grab them. It’s a sign that the mushrooms are fresh.

Dried Shiitakes are generally sold as “dried black mushroom” or “dried forest mushroom”. You can easily identify them due to the texture of the top of the cap.

Fresh shiitake are available in markets which carry Asian fresh produce. You can buy both fresh and dry varieties from an ethnic Chinese, Korean or Southeast Asian grocery where they cost much less than the supers and health food outlets.

How to store shiitake?

You can keep Shiitakes in a fridge for 7-8 days by covering it loosely with a damp paper towel. If dried you can store shiitake at least for a year, if kept in a tightly sealed container, away from sunlight.

How to cook dry shiitake mushrooms?

Dry shiitakes need to be rehydrated before using. You will get better flavor by soaking them in cool water for an hour or more. In case, you are in a hurry, soak them in very warm water for about thirty minutes.

You can use the soaking liquid in some recipes but will make the mushroom flavor too strong in others. Use your own best judgment.

How much does shiitake mushroom weigh?